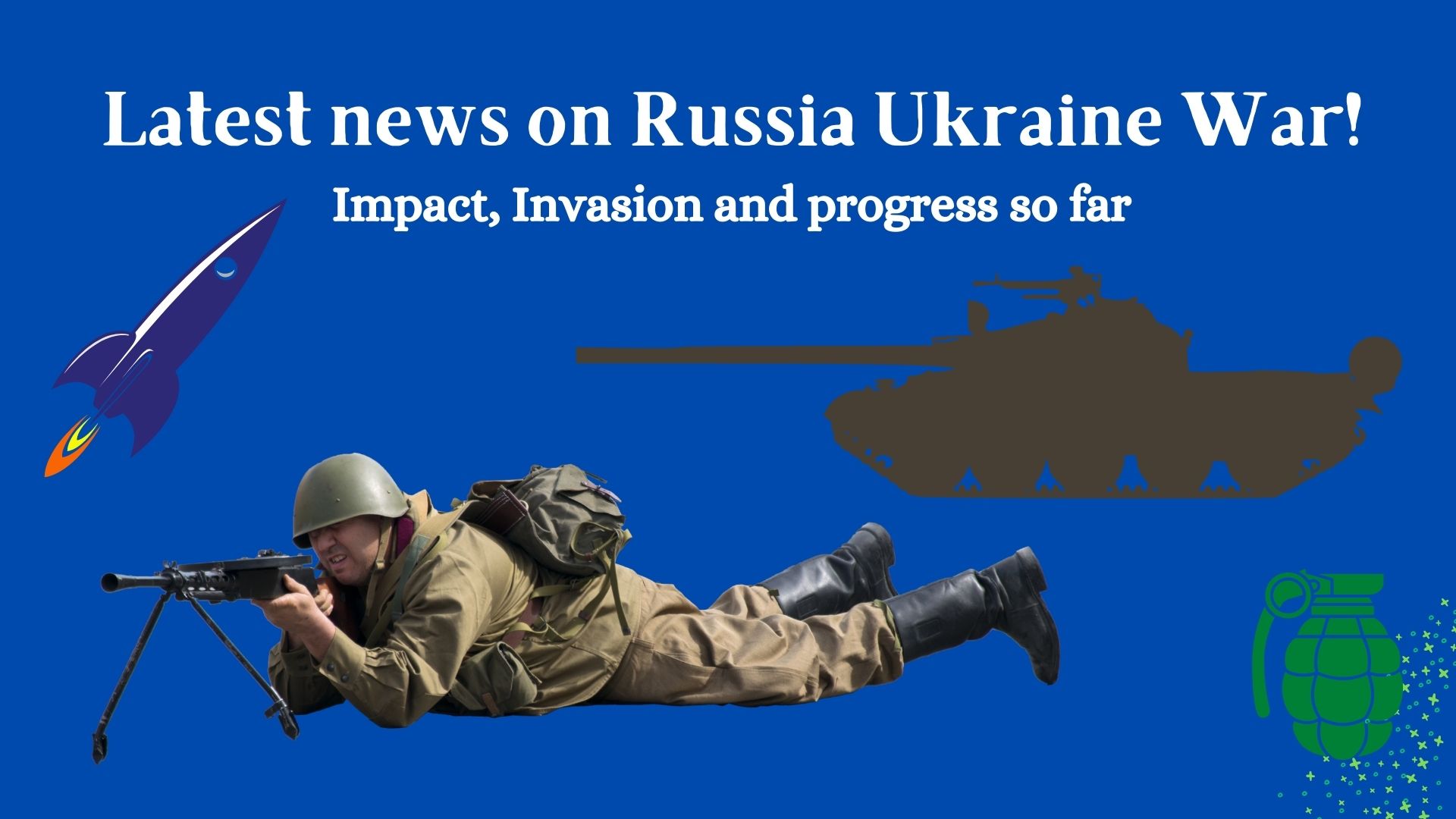 From yesterday, everyone is glued to their television, mobile screens to know everything about the war be it the latest Russia Ukraine news, latest updates, progress on Russia’s invasion, and the impact of war. Though media is giving us live updates of the progress, we surely feel pity for all whose lives are in danger. War creates a picture of bloodshed, deaths, and misery. It evokes a sense of fear amongst the people. The war never helps win anything but losing all. Let us understand the latest Russia Ukraine news, and the impacts so far.

Stock Market Update after the war:

The Indian stock market opened with a positive note. NIFTY, SENSEX all the indices were green.

Overall Global stock market ended in the green. Thus Indian stock market was no different, in the beginning, it opened at 9 am with a 0.8% increase, the Bulls took over the market to spike it up further.

Russia Ukraine News about the invasion?

Russia Ukraine is everywhere, on news, trending on Twitter, memes, stock market. the Russia Ukraine news is making rounds almost everywhere possible across the globe. Russia’s army is progressing towards invading Ukraine. Below are the latest updates so far:

Finally, Russians were able to invade Chernobyl Nuclear Power Plant which is located in Ukraine. It was only after long hours of battle that Russia was able to take control of the plant. This plant is not functional, it was decommissioned long back. Many Ukrainian soldiers die during this invasion.

Indian PM maintained a neutral approach, but he had a conversation with Putin to understand his perspective. PM Modi told him to avoid violence or war and take the route of negotiations through dialogues. As this was the only way to get the issues resolved at the earliest. He also discussed with him about the Indian residents and students residing in Ukraine, and how would they are planning for a safe evacuation process for them.

Joe Biden made it clear that he will not engage in war with Russia. he will take all the measures to limit the sanctions and will impose export controls over Russia. He said that he will do whatever it takes to protect NATO. NATO was already put on red alert after Russia’s invasion of Ukraine. He further said that he will be meeting members of G7 countries to discuss unjustified Russia’s attack on Ukraine, and will take measures to hold it accountable for the consequences.

Russia Ukraine news and its impact?

Russia Ukraine war is sure to impact countries across the globe. Common people will be impacted the most. Let us know the latest Russia Ukraine news:

Russia is the biggest exporter of crude oil. Due to this war, crude oil prices have spiked to $105 per barrel as of yesterday. This has been the highest price per barrel since 2014. The global market cannot afford to bear the crude oil scarcity situation.

The price of gold spiked to $1940 per ounce as of yesterday. In Indian rupees, it is Rs 52,500/- per 10 grams. Russia is the world’s largest producer of gold metal. With this war situation, forecasted disruption in gold supply led to inflated prices.

War amongst 2 countries is not an isolated affair. It does impact everyone on earth. Even though both countries do not want interference, the trickle-down impacts will affect us. Thus, making the economy unstable, affecting GDP, Net Income, and everything. Political conditions will change, as after all, it is a power game.

On 24th Feb 2022 our mobiles, televisions, radio stations were bombarded with the news of Russia’s attack on Ukraine. Russia’s President Vladimir Putin announce early morning its intention to attack and ordered military operations in Eastern Ukraine’s Donbas. The motive stated was not to ‘capture ‘the Eastern European country but just to ‘demilitarize’. Right after the announcement, explosions were reported in Kyiv, the capital of Ukraine. Ukraine has adopted a defensive strategy from Russia’s attack. Ukraine’s President Volodymyr Zelensky openly told that they would defend themselves and surrender will not be an option. Though he makes a plea for peace.

Just to wrap it up, the whole war was planned for months by Russia. It was just waiting for the right time to attack and compel Ukraine to surrender. The intensity of the attack was kept high so that there is no time left for other countries to intervene or Ukraine to get help. Thus, the high intense attack was meant to make Ukraine surrender, as both the countries know that Russia is way bigger than Ukraine in terms of army, weapons, troops, population, strength, and everything else. Russia is a shark, it can easily eat away a small fish like Ukraine.

Let us know your updates on Russia Ukraine news?