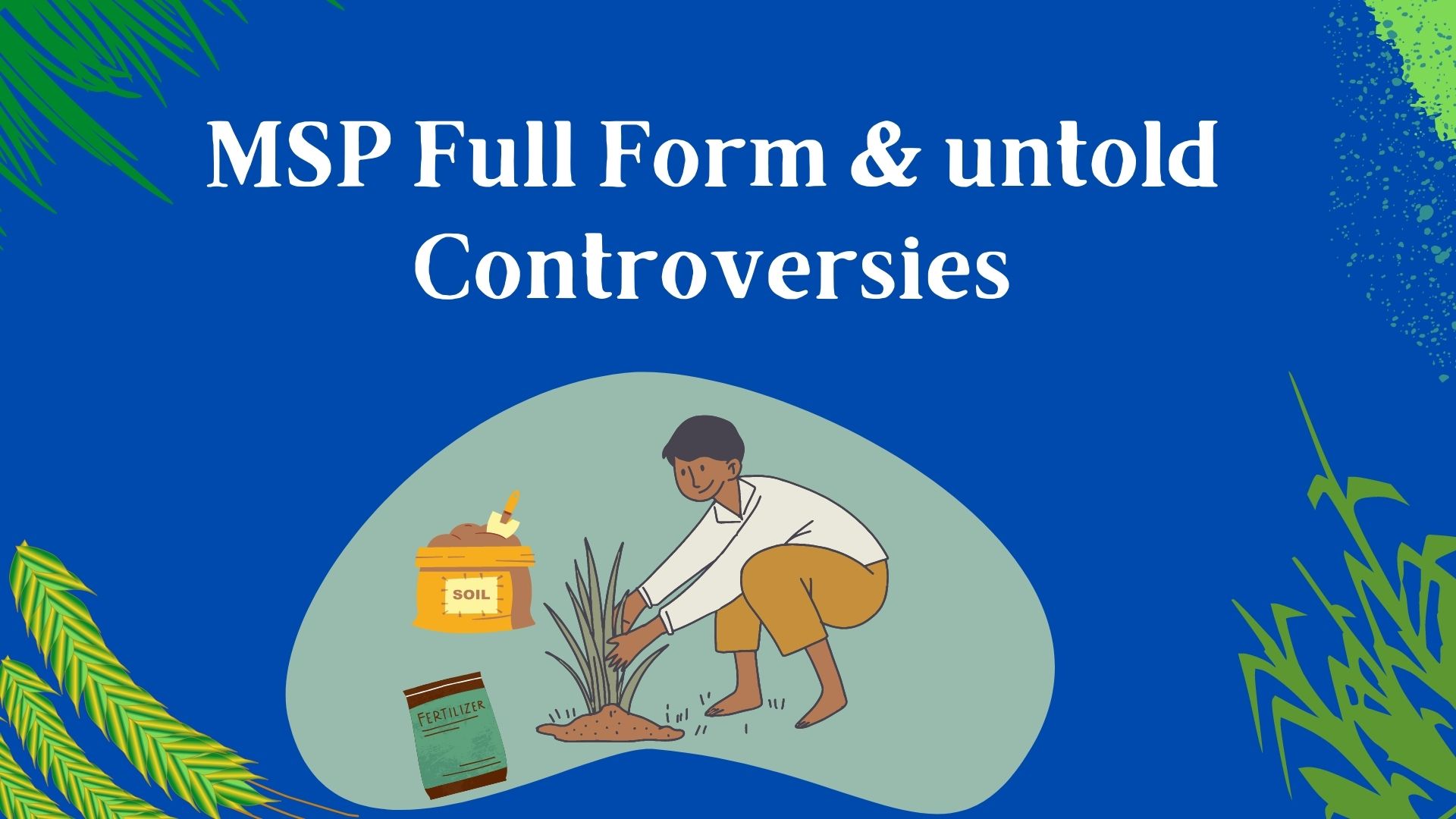 Ever thought about what would you eat if farmers across the globe went on strike? MSP, the burning topic in India has attracted attention across the globe. MSP full form is Minimum Support Price. The farmers in India landed on roads rebelling against Agricultural Bills passed by the Government which threatened the Minimum Support Price (MSP). MSP guarantees them a fixed price for their produce. When farmers resorted to strikes and revolts, everyone was uncertain about the root cause of the issue. MSP full form, the meaning of MSP was unknown to many. However, the internet did a good job in educating everyone about, MSP, MSP full form, Bills passed, and disagreement points of farmers with the Government against those bills.

What is MSP Full form?

MSP full form is a Minimum Support price. It is the minimum price guaranteed to the farmers, at which the government will purchase their produced crops. The rationale behind this was to protect the farmers from the price fluctuations and ensure they get assured prices for their crops irrespective of the market price. In case the market price of the crops falls, the farmers will not incur losses on their produce. The fluctuation of supply due to seasonality, lack of price transparency in the market were responsible for fluctuations in the market price of the agricultural produce. The MSP is fixed even before the crop is sown, to encourage investment by the farmers to produce agricultural crops. Agriculture is the very foundation that satisfies the hunger of not only India but multiple countries across the globe. MSP is intended towards motivating farmers to continue cultivation while ensuring them financial stability in return.

The MSP is fixed by the Central Government on the recommendations of the Commission for Agricultural Costs and Prices (CACP). The CACP is a statutory body and submits separate reports recommending prices for Kharif and Rabi seasons. The Central Government after reviewing the report and considering the recommendations of the State Governments while keeping in view the overall demand and supply situation in the country takes the final decision. Below factors are considered before deciding on the MSP:

MSP Full Form and Its Objectives

MSP full form is a Minimum Support Price. The prices of agricultural produce of farmers fluctuate a lot due to demand and supply conditions. Government intervention is required to protect farmers’ interests. Below are the objectives of setting MSP for agricultural produce:

MSP full form is a Minimum Support price. Commission for Agricultural Costs and Prices (CACP) recommends MSP for 22 crops. Those 22 crops are Paddy, Jowar, Bajra, Maize, Ragi, Arhar, Moong, Urad, Groundnut-in-shell, Soyabean, Sunflower, Sesamum, Niger seed, Cotton, Wheat, Barley, Gram, Masur (lentil), Rapeseed or Mustard seed, Safflower, Jute and Copra. Whereas MSP derived for Toria based on MSP for Rapeseeds & Mustard and for De-husked Coconut on the Basis of MSP of Copra. MSP was a part of the Green Revolution.

The Cabinet Committee on Economic Affairs (CCEA) has approved the increase in the Minimum Support Prices (MSP) for Rabi crops for Rabi Marketing Season (RMS) 2022-23. This has been done with an objective to ensure fair, competitive, and stable income is generated by the way of MSP payments. Under the Pradhan Mantri Annadata Aay SanraksHan, Abhiyan announced by the government in 2018, it will help in providing a remunerative return to farmers for their produce.

On September 27th. 2020, three Farm Bills were passed by the Government in the Parliament. After that is history. At first, the contents of all these three Bills were not understood in depth by the people, but once they were interpreted, the people revolted against them. As per them this would threaten the Minimum Support Price (MSP) and would be exploitative in nature. There began the struggle between the farmers who took to the streets and became vocal about their disagreement with the Government and demanded to revoke all these three Bills else they would continue the revolt. They started living on roads, in spite of the fact that covid-19 was at its peak. Let us understand what were these Bills and how would their implementation impact the farmer’s livelihood.

The Three Farm Bills introduced were as below:

This Bill gives freedom to the farmers to sell their produce outside the Agricultural Produce Market Committee (APMC) regulated markets. The APMCs are government-controlled marketing yards or mandis. These APMCs were earlier formed to protect the farmer’s interest by fixing a floor price to sell their agricultural produce but in modern times, it no longer serves this purpose. Infact it is turning exploitative in various ways. Below were the elements of the above Bill:

This Bill allows the farmer and the proposed buyer to decide on the procurement price or Minimum Support Price (MSP) before the cultivation or production takes place. This was done to widen the buyer base as mandis had a limited number of buyers. Below were the elements of the above Bill:

This allows interstate and intrastate distribution of the agricultural produce of the farmers.  State governments are not allowed to levy any market fees, or cess on these considering them as necessities.

When these bills were passed by the Government, they never thought that rumors would turn the table for them. These Bills were projected as the end of the Minimum Support Price (MSP). The Government was unable to explain the long-term benefits of all these Bills, instead, the fear of Minimum Support Price (MSP) withdrawal had taken a toll on the farmer’s mindset. Below were the elements of the above Bill: 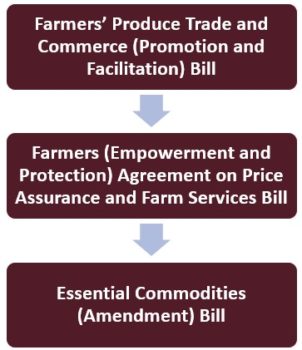 Why did Farmer protest against these three Farm Bills?

Farmers have always followed a particular system of selling their produce to Government administered procurement centers at Minimum Support Price (MSP). These Bills aimed at avoiding Agricultural Produce Market Committee (APMC) regulated markets. This created misunderstandings since there will not be any Government-regulated markets to sell their produce. This would mean that they would be forced to sell their products to large private corporates. This opened room to various possibilities like the corporates might exploit the farmers by purchasing their produce at minimal cost while selling it at exorbitant prices to the consumers. Below were the reasons for the protest:

Bihar repealed APMC in 2006. However, the land, market structure, type of transactions, type of farmers, and volume of transactions in the Government regulated Agricultural Produce Market Committee (APMC) differs from State to State. The volumes of transactions conducted in Bihar’s mandis were very less. The objective of repealing the APMC Act was to invite private corporates to invest in the infrastructures, facilities, equipment and develop agricultural markets in the rural areas. Rural development will follow as a by-product. However, though the exports boosted, the farmer’s income levels improved, but private markets did not become dominant enough to overpower the farmer’s bargaining power. The agricultural produce in terms of quality and quantity improved. The improvement levels were not great, but at a consistent rate.

Comparing Bihar’s case with other states like Punjab, Haryana where the volume of transactions in APMC is huge, the land, market structure and types of crops grown also differs will not give you predictive results.

MSP (Minimum Support Price) came into existence in the 1960s when India was struggling to take the road to development. Food shortages, price fluctuations, inadequate infrastructure haunted the country. Green revolution attracted the attention of all, and India bestowed with rich resources, had the possibility to become a leader in crop production. Exporting crops could add to India’s forex reserves while gaining a global presence. Let us know the main reasons why MSP came into existence in India?

Was Minimum Support Price (MSP) successful in its objective?

Thus, the Minimum Support Price (MSP) was not immune to issues, defects, and hollow promises of changing government.

The government repealed all the 3 agricultural bills and put an end to 15 months of protest by farmers on the road.

Let us know your thoughts about the Farmer’s protest on these three Bills?